An extract from a recent article in the engineering news.  Read the full article by clicking on the link below:

Amid extreme weather, regulatory barriers and import competition, South African farmers need to think creatively about farming practices – not only to reduce costs but also preserve an environment that is struggling under the pressures of a growing global population, says agriculture infrastructure supplier Haygrove South Africa marketing and sales consultant Jana Loubser. 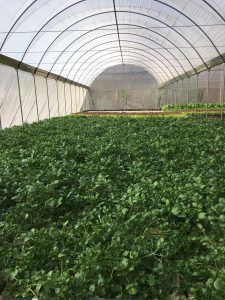 Seedlings are secured on floating rafts with their roots suspended in pools of nutrient-rich, oxygenated water and matured to harvest. The system is housed in Haygrove’s multispan polytunnel structures, providing controlled, optimum conditions for the crop.

“The system is completely organic, requiring no chemical fertilisers or sprays, and uses integrated pest management, where mostly beneficial bacteria are used to protect and fight against intrusive bacteria and viruses,” highlights Pienaar.

He adds that an attractive feature of the DWC system is that a significant number of crops can be produced in a smaller area, with planting densities of up 25 plants for every square metre made possible in certain instances. 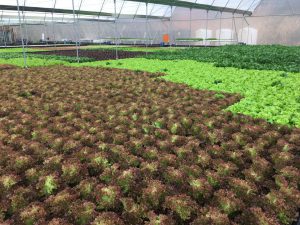 The system is also water-wise, with as little as between 144 m and 250 m of water used to grow each head of lettuce. Water is sourced from a natural stream that runs through the property and is recirculated to eliminate any discharge into the environment. The system is also designed to optimise energy consumption, with the whole 1 ha system operating on 4.5 kW of power.

Loubser adds that the Haygrove structure design features roof vents to allow for passive venting and efficient gas exchange. In addition, the tunnel is 6 m high, ensuring a large internal air volume for effective temperature and moisture management. The roping system that keeps the polythene in place makes it suitable for high wind areas, while the insect net that is used for the side skirts of the tunnel around the perimeter provides an effective barrier against insect ingress when combined with a double-door entry system.

The tunnel is also covered in specialised diffusing polyethylene plastic, which optimises plant growth, filters out the infrared light produced by the sun – which can cause sunburn on plants – and effectively manages temperature spikes. 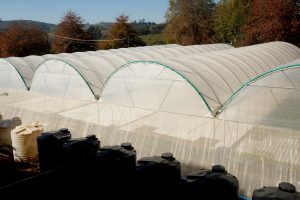 The project was started in 2011 and expanded in 2015, with a second phase of expansion planned towards the end of this year. This phase will see the integration of an aquaponic component, in which fish will be used to generate water-soluble organic nutrients that will form the basis of the hydroponic system.

“South Africa is one of the most innovative countries when it comes to agriculture, as a result of the varied growing conditions here. Many of the technologies used by Haygrove’s clients around the world originated here and we are proud to be involved in these developments,” says Loubser.

Haygrove has a dedicated research and development team that gathers information and ideas from Haygrove agents and growers globally using this insight as the basis of new products, which are developed and trialled before being made commercially available. Loubser highlights that some of the company’s latest tunnel innovations include full-length, top-roller venting and increased bay widths.

The company has also launched a new range of shade-net structures that compete pricewise with traditional pole and cable structures while offering advantages such as the option to upgrade to polythene and increased internal air volume.

“Flexibility has always been key to the Haygrove structures and, consequently, many of our design features can be retrofitted. This means a grower with a tight budget can cover a larger area initially and then finance upgrades from the increased production.” 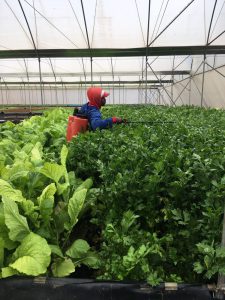 Haygrove has also created a product for emerging farmers and community projects called Farm-in-a-box kits. They provide users with everything they need to start a small tunnel farm or backyard garden, including an irrigation system, worm farm, heirloom seed and garden tool set. The kit is completely organic and designed to be self-sustainable.