Whether you bought your original structure from us or are just looking for replacement poly for your existing structures, Haygrove prides its self on our customer care.  We strive to ensure that we offer, you the client, the best and most cost effective means of covering your structure.  We are in constant negotiations with suppliers to ensure that this is a reality.

We try to hold stock of the most popular widths of poly and we are continually importing containers of poly. So if you want a specific size that we do not have in stock we will be able to add it to one of our orders. 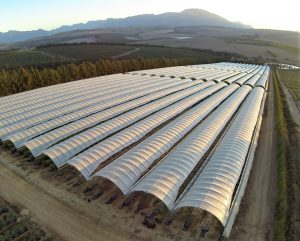 Benefits of Changing your plastic.

Degradation of LDPE films:
LDPE or Low density polyethylene is the most commonly used plastic for greenhouse covers. This is in part due to its good chemical inertness. It also has good mechanical and optical qualities. These factors combined with competitive market prices make it the number one choice worldwide. However, like all organic substances polythene slowly degrades under the influences of:

These factors eventually compromise the mechanical and optical properties of the film. In warm climates the combination of UV radiation with agrochemicals used in farming aggravates this process, often dramatically. In particular sulphur and chlorine, both of which are used to control pests and disease are enemies of polythene plastic.  Sulphur is particularly aggressive in this regard. So unlike other applications of plastics for agricultural uses, greenhouse films have a limited service life and degrade quickly when exposed to the various factors listed above.

The life time of polythene film varies from one company to another but they all fall within one to four seasons, with four seasons being four winters and three summers.  The lifetime that the manufacturer indicates is heavily affected by the various environmental conditions the film will face in its lifetime. So a film that is estimated to last 4 seasons in central Europe may only last 2 to 3 seasons in a Mediterranean climate.

One of the biggest concerns for the grower should be the degradation of the optic qualities of the film. The transmission of light through the film to the crop below will lessen and it will, over time, affect the productivity of each plant.

One particular case study took blueberry plants that were grown together for two years under the same film and placed half of them underneath brand new poly. The rest were left under the two year old film. After a year the plants under the now 1 year old poly were producing up to 350 g more per plant than the ones under the three year old plastic.

So there is a definite case for changing your poly as per the manufacturer’s recommendations or perhaps even more often depending on the climate you grow in and your farming practices.

Even if your film still looks good the light reaching your plants may not be.

Please visit our website or give us a call.